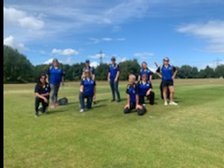 Harrow batted first and displayed some very strong batting skills. However, runs were contained by tight fielding from the CrEW team, using skills developed from their recent practice session on fielding. Together with Emma's experienced wicket keeping, many 4s, runs and extras were saved, leading to praise from Ryan who stated that "the fielding was amazing." Precise bowling during the 20 overs was also highly beneficial, with Tonya, Aileen and Tina conceding only 6, 11 and 14 runs respectively, and Aileen did not bowl any wides or no balls. Two wickets were taken by Louise and Tina, and Harrow scored 115 runs.

Clare and Emma opened the batting, and developed a good partnership, providing a secure start for the team. This was followed by Tonya tonking an amazing 27, and Gail, Annie, Pam and Lexi producing steady runs and moving the score along nicely. At the same time, wickets were falling making the outcome of the match wide open - and with 5 overs to go, the CrEW were 8 wickets down and needed 21 runs to win. There was lots of loud cheering of encouragement, while others could not watch, and Emma went for a walk around the boundary! Ali and Aileen developed an outstanding partnership at this crucial time, scoring the runs needed through calm and skilful batting, and as the total of 116 came up, delighted team members ran on to the pitch to celebrate the second league win! Ali was player of the match for her flexibility and fantastic contribution to the match.

With many thanks to Harrow for the match, and it must be recognised that they had 9 players only. Thank-you also to Ryan and Lucas for umpiring, for Lea for scoring and for all the support from CrEW and club members.