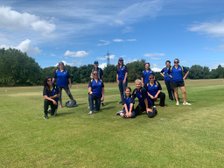 Women’s first outing and a win! Match report below.

Nervous energy as all gathered at Hackney Marshes post a downpour. Stoke Newington won the toss (their first outing too) and elected to bowl.

The batting was opened up by Tina/Tezal who got us off on an even start followed by Fran / Louise. Runs mounted with middle order pair Ali/Monika with Synnove/Mirei keeping up the pace despite a couple of wickets falling. Gail stormed through as with the final bat to take us to a high chasing target of 159. Gail hit 7 4’s followed by Ali with 4 4’s with a 4 each from Tina, Fran, Kelly and Mirei. 4’s, bring on the score!

Bowling attack was consistent opened by Gail and Ali who both took wickets in the first 2 overs. Kelly kept the runs down with online consistent bowling keeping them in their crease. Tina had the pace with Monika bowling great length. Fielding was tight with fantastic back up and some great catches by Fran and others although Monika will never forgive Ali as she had a phenomenal catch off a no ball….. The final score they achieved was 72.

All returned to the CECC Calthorpe ground in jubilant victory and the celebrations continued well into the night.