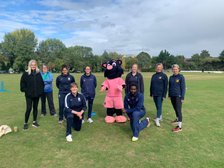 Everyone was a winner at Crouch End Cricket Club, as 35 girls, 2 Middlesex star players, 2 club coaches and a furry panther called Pinky took to the field for their first ever Girls’ Cricket Day.

The event on 26th September was designed to entice more girls to take up cricket and to inspire the next generation of players, as part of the ECB’s Women’s Cricket Month.
“The power of cricket is truly amazing!” Middlesex Women’s player Olivia Rae tweeted afterwards: “I have a massive smile on my face from being at @crouchendcc for their girls’ cricket day!”

The sun shone and despite a nippy wind, there were plenty of big grins on small faces as the attendees (aged 8-19) were put through their paces by special guest coaches Rae and Middlesex Women’s captain Naomi Dattani.

All-rounder Dattani, who also plays for Sunrisers and London Spirit and is one of 25 players in the country contracted to become full-time professional cricketers, led groups of girls in bowling. Rae, who has represented Scotland 76 times and runs her own coaching company, took on batting duties. A highlight was when the action moved to the club’s new all-weather nets, where Rae donned full protective batting gear and Dattani bowled at her – fast. The girls asked what speed she bowls at: “Up to 70 mph.” There were gasps.

CECC coaches Emma Whiteman and Ricardo Kirton were in action too, teaching fielding skills and running mini-matches. “It’s such an exciting time in the development of the women’s game,” says Whiteman, who is also a Middlesex girls’ coach. “You hear girls say they want to be a cricketer when they grow up, and then they’re here at the club meeting a female professional cricketer and knowing that that is now an option for them. It’s great to have these role models.”

Asha, 10, said: “It was amazing to meet Olivia and Naomi. They really helped me and gave me tips I’d never heard before. And they signed my bat!” While she and a few other attendees are already members of the club, the rest were newcomers, some of whom had never held a cricket bat or tried straight-arm bowling before.

The “mystery guest”, Middlesex CCC mascot Pinky the panther, might not be able to compete with the star players, but gamely joined in the fun and posed for selfies, even taking a turn bowling at Dattani.

“Keeping active and connecting to our communities is so important and cricket is a vehicle for this,” says Olivia Rae.
In the current circumstances, this kind of event is more complicated to put on, but more vital than ever. The club created an environment in which the girls and their parents could feel safe and comfortable, by for example running two separate sessions in order to contain numbers, and hand sanitizing every ten minutes.

“It was a wonderful day! The feedback has been incredible and we’ve gained new recruits for our regular girls’ training sessions on Saturday mornings,” said a club spokesperson. “What a thrilling opportunity, to be coached by your cricket heroes…Members of the women’s team were hanging around trying to earwig! This is such a friendly, inclusive club and we’re proud to be setting up a new home for women’s and girls’ cricket. If you want to play the game, whatever your level, it’s important to have fun doing it.”

2020 is the inaugural year of the Women & Girls’ Section at CECC. For information on training sessions or membership, or to get on the mailing list for future events, contact: kellyminett@outlook.com